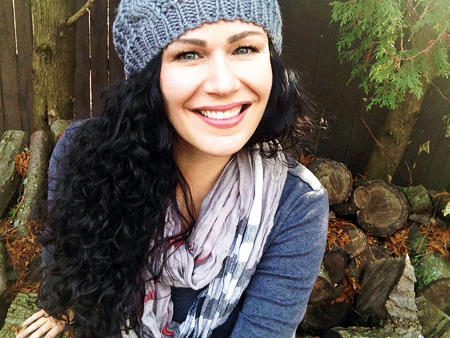 Love this new scarf that hairlip bought Me!

mystery pig (b from Oregon)  has sent yet another $300 tribute last night!!  Keep it coming, mystery pig!!

hairlip got totally worked over by Princess and company!  With a few photos of each of Us, he was promptly put into the bone-zone…then We then pounced on him and raped his wallet — gangbang style!  The blonde bombshell scored $200 Ugg boots and another pair of Raybans.  One look at Her piercing blue eyes and he was paralyzed like a deer in headlights.  he found himself clicking buttons in a daze!   HRC bitchslapped him for a bright red Helly Hansen red stadium parka and about 3 pairs of pants!   We got $200 for a hair appointment!  Moonstone earrings for Me! Then he picked up Our dinner tab!  he shopped Eddie Bauer and even more items off Amazon! Our fun continued!  he was a 3-way wishbone!   We were so pleased with your performance this week, puppy!  Oh what a blessing!  What Joy and Bliss it is serving the most awesome Women on the planet!!

slavey davey sent $100 paypal, $100 Timberland boots and $25 Itunes gift card!  he’s going to do a little more shopping.  I will be picking out the items today. 🙂

loopy4legs midnight update:  he spent $200 on a pair of Michael Kors shoes which are most likely going to be WAY too high for Me to ever want to wear in public.  So My plan is to take a few pics in them and sell them back to him for $1,000 the next time he buys coke.  he can snort it out of MY shoe which I’m sure will make it even more potent and kill even MORE brain cells!!   Hurray!!   he also sent another stray $100.  lame.

loopy4legs Update: $400 more cash and a Cache dress for $180.  Omg!  I lost track of all the cash he spent today!  My fun might be done for the night because his adult aged son just sent him a message warning him to “delete his phone” because mom is pissed at him for something!  HAHAHAHA  Greatest Day Eva!

Update: loopy4legs coked-up spend-binge!  $200 prepaid card, $300 prepaid card, $250 prepair card, $600 Cash, $300 Credit Card tribute, $250 BestBuy gift card!!  I already used the Best Buy to buy another DropCam.  I then sent him wired on coke to Macy’s and he spent $400 on this Michael Kors purse.  First we were looking at a cheaper purse, but I told the Macy’s woman on the phone to get the more expensive one instead.  he was pleasantly surprised when she rung him up.

loopy for legs popped out of recovery!  Coked up and ready to pay!    Time for him to start snorting and hitting CVS for rechargeable credit cards!  he’s buying the cards now…and saying “yes Boss” in front of the cashier.  lol  Fun with cokeheads!

slave d’s recurring $500 payment came through this weekend!!  speedy dick sent $500 as We drove home from the campground and terrance sent $400 last night while We watched TV.    Awww…nothing like getting cash whilst away from the computer. 🙂

We had a fun time this weekend.  Fishing sucked.  But We had a ball.  We broke  several of our fishing poles and I put a few more on My wishlist which were immediately purchased by wimpdick and slavey davey.  Good boys for answering the call of duty so quickly!  Lots of other items disappeared off My wishlist this weekend.  We are going to be heading out again early next week to camp again.  I want to hit this state park during the week because weekends are just too crowded.  We will probably do a lot of biking because this place is suppose to have several beautiful bike trails.

crunk go buy 2 more bottles of Vodka!  I want you drunk all week!

hahaha! sissy tommikins had an awesome month!!  $3,700!  Still, after spending that much he texted ME to confess he was jealous that pantystain beat him to buying LadyCop’s gun holster.  hahaha!  I wonder what will happen to his poor little brain once he gets his box of precious sniffables!?!

pantystain bought HRC a shoulder holster for Her Glock 19.  What a nice surprise to wake up to!

Another surprise..an “old flame of shame” has been shopping on MY amazon gift list.  I received 2  $50 boxes of kitty litter refills from him.  Yes, you haven’t shopped for a LONG time, tom.  Go hit MY wishlist again..I know you miss it terribly!

pigsnot just spent around $1500 on Princess and company!  he said he can’t afford more.but you can bet we will be padding up our wishlists for part 2 of this shopping trip! Gobble up that wishlist, piggy! More more more!  you love watching the items disappear as we greedily keep adding more shit for you to buy! Nomnomnom!  piggy can’t get enough!

I’m so sleeepy.  Gonna go to bed with a big smile on My face!  Nitenite, My boys!

Guess who just called?  pigsnot!  he said he can’t shop right now..but he will do his best to start again!  I’m adding some big $$ items to My wishlist because the longer he stares at them..sitting there..waiting for him.his name written next to the items.”pigsnot shop!”..the stiffer his grisly old man dick gets and the faster he starts popping those credit cards out!  I think I’m going to add a $200 juicer to MY wishlist..Stevie has Me talked into trying juicin’.  Such a gross term though.  Start dipping into your savings and your retirement!! It all really belongs to US, pigsnot!  The Bitch Queens are ready to ride your credit card like a platinum pony!  Yeeeehaw MothaFuckas!  We want to spend all your Buckarooooooos! I am convinced that Me and Stevie magically conjured up pigsnot last night by discussing whether or not he would be back for more shopping..and if so.whatever would we add to our wishlists now?? hahaha!  Very next day..he’s sniffing around like a desperate little doggy. Oh..stewy just sent $50 donation.  Pinch Me.  Yeah, that was exciting. Condoms with teeth I hope they start selling these to chicks in the US! I’m sure all your wives wish they had one for your pin dicks  . Speaking of teeth..I got My teeth Zoomed yesterday.  Holy Fuckoly!!  I have gotten other teeth whitening in the past..but they were kinda like Zoom.but like in the mall.  I thought they were the same as Zoom.but they certainly aren’t quite the same.  This was the $600 Zoom at your dentist..(but I got it cheaper with a coupon–look at Me be frugal for once!).  Anyway..My teeth are Krazy with a K WHITE!! The whitest white on the chart now. But it fucking was surreal how sensitive MY teeth were for hours afterwards.  It still gives Me shocks from ice drinks or hot drinks!  OWWWWW!!  It would be sweet to force one of you bastards to go through 2 full sessions of Zoom, one right after another.  It would be the cruelest torture EVER.  I can’t imagine going through EIGHT 15 minute sessions of that shit in a row!!

Finally the the Photoshop for mac and the white backdrop I wanted courtesy of twinkie.  he also got Me a pair of red Miz Mooz wedge heels.

Ok.like I said.I don’t need anymore Miss Me Jeans. I got like 6 pairs. Now I’m on to Hudson jeans.  They aren’t as blingy but they are so comfy.  Also more expensive.

OMG I love this crazy ass HUGE moonstone ring!  I think hairlip got it!! God, I’m addicted to Etsy jewelry.  I’d rather have a cool handmade gemstone ring over diamonds any day. 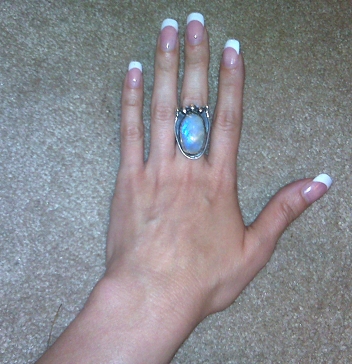 fatmac, had a manicure this week.  Pay up! received I will be needing toes done in a few days too!

Time for more CASH donations!!  I want ANOTHER vacation!!!