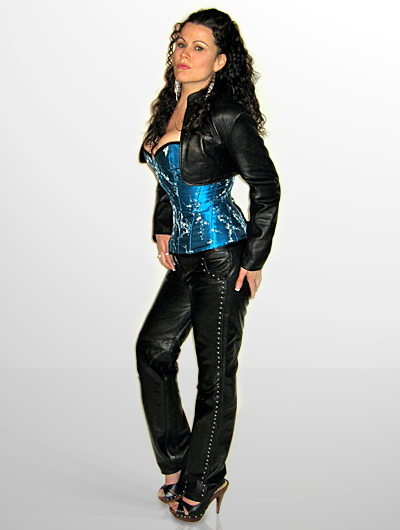 Q)Are you 24/7 into the Dominance scene?

Q) Is there a life without dominance for you?
Is your life ok with this?

A. If I want a loving, equal relationship with someone..I will
have it with someone Equal to ME…another un-oppressed,
superior female. I am fanatical in MY beliefs about men and
their natural plight of stupidity, unimportance and inferiority,
of course, there are many deluded, ignoramus men out there
who find this offensive and consider a Beauty like ME who
doesn’t kowtow to the male appendage a “waste of pussy.”
I am always butting heads with these morons. Some people
in the BDSM world think MY ideals are obsessive and end
up criticizing MY lifestyle and philosophies. Otherwise, My
life is made much more comfortable and leisurely by MY
lifestyle. My slaves know they are here for no other purpose
than to serve ME. We are both very happy with their life as chattel.

Q) Do you have hobbies and interests unrelated to dominance?
If yes, what are some?

A. I am always so busy doing phone calls, sessions and
website development that I have less time for MY hobbies.
I like to write, and MY webpages give ME an outlet for
this. I’m not very sporty, but enjoy working out and aerobics.
Shopping is one of MY favorite past-times, going out to the
lesbian bars or hanging at the local danceclubs rejecting the
dumb-shits who buy ME scads of free liquor. I like getting dressed
up and going out to dine at fine restaurants, being the center
of attention and talking about MYSELF. I like to read feministic
writings, women’s studies and Female Supremacy articles.

Q)What is your favorite thing in life?

A. I guess one of MY favorite things in life is seeing another
Woman learn something about men from ME. When a fellow
Sister says, “fuck these morons. I’m living for ME” when a Woman
stops picking the fluff off of men’s jackets and baking meat-loaf
for some unworthy sow and recognizes Herself as the intrinsically
wonderful and superior Woman that SHE is, I am MY happiest.
My female friends see the stress-free; leisurely life I lead and they
want the same. After watching my sessions and talking to MY morons
on the phone, they start seeing men as what they truly are, inane little
pigs who need controlled, abused, humiliated and exploited. When I
see a once oppressed woman who had worked to gain male approval
in the past, suddenly do a 180 degree turn and say, “I’m a Princess
too and I’m done trying to please the unworthy and men are here
to do MY dishes and buy ME pretty things” I am MY most proud.

Q)Can you imagine your life without dominance?
How would it be for you?

A. Absolutely NOT. I adore MY work. I adore MY lifestyle.
I couldn’t imagine living a life where I wasn’t being completely
adored, worshipped and supported. You get used to be treated
like a Queen, you begin to expect it.

Q)Tell us about your life in the Dominance arena and
how do you relate to the whole scene in general.

Q)What is your favorite area in the DOM scene?

Q)What are your petpeeves in the Dom scene?

A. Weekend-wankers or pseudo subs. Men who want to be
submissive until they splooge. Ignoramuses who expect a Domme
to domme them the way they want, that she exists for no other reason
to fulfill their wanky fantasies, peons who believe they are merely
“paying for a service” instead of “paying for the opportunity to
serve and suffer for a Beautiful, Superior Goddess Bitch.”

Q)Give us a few quotes in which you live your life by.

A.”BITCH is a state of FEMALE perfection.”
AUTHOR …Princess Sierra

“In HER image GODDESS created WOMAN.” And on the
last day, because GODDESS had nothing left to do, SHE created
man from all the leftovers SHE had creating WOMAN.
GODDESS created man with a leash between his legs, but as soon
as SHE put him in the Garden of Eden he became unruly and
started running around and broke off his leash and only has a
small part of it left. SHE created man to serve Woman, to lift and
carry the heavy things, to plow the fields for Woman, to crawl
beside Woman, to ease WOMAN. GODDESS let HER have
dominion over the fish of the sea, over the fowl of the air, over the
cattle, and every other creeping minion that creepeth over the
earth.”
From the BOOK OF SIERRA

A. Dominance is about the WOMAN doing what she likes
to do, NOT what the wanker wants.
Male ejaculation = the expulsion of cerebral fluids or brainjuice.
Ejaculation MUST be controlled. Take control of his penis and
you easily control the man. A man is entirely motivated by 5 or
6 inches of engorged blood. men must be conditioned, whipped
and trained like dogs or they will run amuck. Humiliate him, so
he knows his place, give him the occasional doggy treat so he
learns to be grateful. Treat him like this and he will long serve.